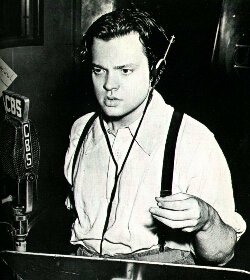 Orson Welles, The Mercury Theatre, and The Campbell Playhouse

The beginnings of The Mercury Theatre on the Air actually go back to the formation of The Mercury Theatre itself. Having successfully produced Marc Blitzstein’s controversial labor union opera, The Cradle Will Rock, for the Federal Theatre Project in June of 1937, John Houseman and the 21-year-old “boy wonder” of the theatre, Orson Welles, decided to form their own theatrical producing company. In August of that same year The Mercury Theatre was born, starting off with total monetary assets of $100 (about $1150 in modern funds). Their first production, Shakespeare’s Julius Caesar, adapted by Mr. Welles (and set in fascist Italy), opened in New York on November 11 and created as much controversy as the young producers had hoped; The Mercury Theatre (along with the widespread public recognition of Orson Welles) was off and running.

By this time Orson Welles was already a radio veteran, having made frequent appearances on The March of Time as early as 1935 and, in fact, at the time of The Mercury Theatre’s formation, was engaged in a seven-part dramatization of Victor Hugo’s Les Miserables, which was airing on Friday evenings between July and September of 1937 over the Mutual Broadcasting System. Although not officially a Mercury (the series had been airing for a few weeks before The Mercury even came into existence), several actors who were to become fixtures of The Mercury Theatre of the Air such as Martin Gabel, Alice Frost, Ray Collins, Virginia Welles (Mrs. Orson Welles), Agnes Moorehead, and Everett Sloane, appeared in the program, which Mr. Welles produced, directed, scripted, and starred in.

The summer of 1938 found Orson Welles (who was just finishing his season-long run as The Shadow) with the chance to display the talents of his Mercury Players on his own series to be broadcast from New York City. Initially to be called First Person Singular, the 60-minute program went on the air on July 11, 1938 as The Mercury Theatre on the Air. During that first 9-week summer series, it became increasingly apparent to the more perceptive radio listener that The Mercury Theatre was something special. Unlike many anthology series before and since, the stories were chosen because of their suitability to the radio medium. Also, the innovative use of sound-effects and music (by CBS staff composer/conductor Bernard Herrmann), combined with the gripping performances of Mr. Welles, made The Mercury Theatre one of the most compelling programs on the air. The stories presented were also out of the ordinary. Bram Stoker’s Gothic horror tale, Dracula, opened the series, followed by, among others, Treasure Island, A Tale of Two Cities, The 39 Steps, Abraham Lincoln, and The Count of Monte Cristo. While ratings were not high, CBS executives knew they had a worthwhile prestige program on their roster, and Welles was invited to add the show to the regular CBS lineup beginning in September of 1938. By the time the second series of 13 Mercury Theatre shows ended on December 4, Orson Welles was as big a celebrity as radio had produced, all because of an updated version for the airwaves of H. G. Wells’s The War of the Worlds, adapted by Howard Koch (who was now scripting most of the shows) and John Houseman, but credited by the general public entirely to its director, producer, and star, Orson Welles.

Despite the show’s dismal Crossley rating of 5.4, the fury created by the War of the Worlds broadcast proved to the Campbell’s Soup company that people were listening and, beginning December 9, The Mercury Theatre became The Campbell Playhouse, taking over the 9pm Friday time slot formerly held by the series Campbell had previously sponsored, The Hollywood Hotel.

While The Campbell Playhouse had a bigger budget than The Mercury Theatre, allowing for a weekly guest star from the stage or screen (which undoubtedly helped to boost the listenership to a respectable 14.4), the integrity and general flavor of the show remained much the same. Mr. Welles’s co-stars were engaged only with his approval (he refused more than one well-known motion picture player) and generally fit into the proceedings very comfortably. Thus Rebecca, the debut show, could boast the presence of Margaret Sullivan, while other programs featured Katherine Hepburn, Burgess Meredith, Helen Hayes, Madeleine Carroll, Laurence Olivier, Gertrude Lawrence, Joan Bennett, Lionel Barrymore, and other prominent actors. The stories tended to lean more towards popular contemporary literature than did The Mercury, with many of the plays coming from the motion pictures or the best-seller list.

In the show’s second season, it was moved from New York to Hollywood to accomodate Orson Welles and the other Mercury Players, who had signed a contract for their first picture at RKO (In the weeks prior to Campbell’s move to the West coast, Mr. Welles was traveling back East for the broadcast every week, studying his script in route; TWA gave Welles a special award for being their best customer of 1939, with combined mileage of 311,425). His picture work eventually meant that he was forced to give up The Campbell Playhouse (his last broadcast was on March 31, 1940), but the series lived on for a season without him. Now directed by George Zachary and scripted by John Houseman and Willis Cooper (who would later write and produce the radio series Quiet, Please!), the post-Welles series continued to produce top-grade radio drama with an impressive array of guest stars but, as none of the recordings of the final season appear to exist, one can only speculate on the entertainment value of such shows as Air Mail to Red Riding Hood with Miriam Hopkins and Humphrey Bogart, Kind Lady with Gladys George and Herbert Marshall, The Go-Getter with Helen Twelvetrees, Randolph Scott, and Frank Morgan, and My Client Curley with Fred Allen and Beatrice Kay. Orson Welles produced and starred in several excellent radio series during the next decade, but none ever matched the inventiveness and overall quality of The Mercury Theatre on the Air or The Campbell Playhouse.